Cappadocia region 60 million years ago; Erciyes emerged after millions of years by the rain and wind eroding the soft layers formed by lava and ashes sprayed by Hasan Mountain and Güllü Mountain. Human settlement dates back to the Paleolithic period. The lands where the Hittites lived became one of the most important centers of Christianity in the later periods. The houses and churches carved into the rocks have made the area a huge shelter for Christians fleeing the pressure of the Roman Empire. The Cappadocia region is a region spread mainly to Nevşehir, Kırşehir, Niğde, Aksaray and Kayseri.

The region is of great importance in terms of tourism today. Urgup, Avanos, Göreme, Akvadi, Uçhisar and Ortahisar Castles, El Nazar Church, Aynalı Church, Güvercinlik Valley, Derinkuyu, Kaymaklı, Özkonak Underground Cities, Ihlara Valley, Selime Village, Çavuşin, Güllüdere Valley, Paşabağ and Zelve are the places that should be seen. . Traditional Cappadocian houses and dovecotes carved into the rocks express the originality of the region. These houses were built on the slopes in the 19th century, either from rocks or cut stone. The stone, which is the only architect material of the region, can be processed very easily since it is soft after leaving the furnace due to the volcanic structure of the region, but it turns into a very durable building material after contact with air. Due to the easy processing of the material used, the stone workmanship unique to the region has developed and has become an architectural tradition. The upper part of the doors made with arches is decorated with stylized ivy or rosette motifs. Pigeons in the region are small structures built in the late 19th century and 18th century. Some of the pigeon houses, which are important for showing Islamic painting art, were built as monasteries or churches. The surface of the Güvercinlik is decorated with rich decorations and inscriptions by local artists. The region is also famous for its winemaking and grape cultivation.

There are no reviews yet.

Be the first to review “CAPPADOCIA TOUR” Cancel reply 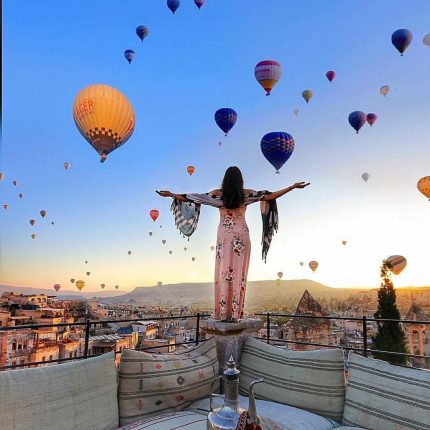 Baraka general company was founded in the land of green paradise, defined by cultural diversity, progressive development and timeless elegance, the best crescent moon and a star representing a wealthy nation that combines various elements and nationalities, the land of peace.